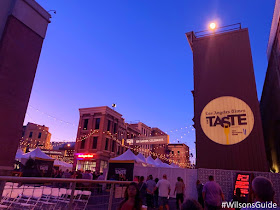 Someone had to try to conquer the 10th Annual LA Times The Taste food & beverage festival, and it might as well have been me!


Returning to the Paramount Studios lot in Hollywood, The Taste took over the studio’s New York back lot (complete with brownstones and fire escapes) for Labor Day Weekend. Underneath the glow of hanging market lights and to a soundtrack of upbeat hits played by a DJ, various restaurants and wine, beer and spirit companies from around the world offered bite-sized tastings of their renowned food and drink specialties. Guests could come Friday, Saturday and/or Sunday night, 7:30 – 10:30 p.m., cruising by each participating vendor’s pop-up stand, checking out both cooking and beverage demos, and engaging in other interactive attractions, like photo booths and games.

Having stopped by last year’s festival, I was excited to discover what was new — but also the same — this time around.


Here’s a glimpse of the top contenders that caught my attention over the weekend, in the following eight categories:


Best Bird: It was all about the chicken!

Chicken ... was everywhere!! Whether it was riding solo or accompanied by sides; slathered with BBQ sauce or fried to a golden delight; or smooshed between two pieces of bread to make a sandwich, chicken showed up — and out — in a very big way. For another year, Gus’s Famous Fried Chicken gathered long lines thanks to its crispy fried chicken, and Hotville Chicken passed out its infamous (and spicy) Nashville Hot Chicken. Yardbird Southern Table & Bar had a noteworthy fried chicken sandwich with soft biscuits, and LN2, came through with crispy chicken sliders. Yet hands down, Doghaus wins my vote for Bubu’s hot chicken grilled cheese, stacked with slaw, pickles, sauce and tender fried chicken, all between toasted bread. The Doghaus team was also quick to share that throughout September, $1 will be donated to the No Kid Hungry initiative for each purchased Bubu’s sandwich. Eating well and supporting a good cause — can’t go wrong there! I’m also giving nods to Black Market Liquor Bar for its Spicy Korean Chicken Wings — they were the perfect balance of fiery and sweet — and to Pedalers Fork’s Sweet Chili Wings, accompanied by a tangy BBQ sauce. 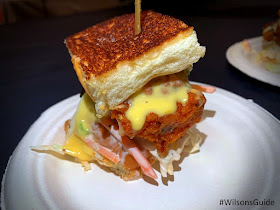 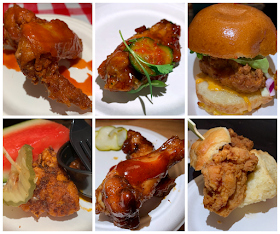 Best Seafood: Way too hard to choose just one!

I was blown away by how many restaurants came with their seafood A-game. Not only were items bursting with so much flavor, but many were quite complex little creations, with lots of different textures and aesthetic appeal. The Bazaar by José Andrés had smoked Hamachi cones that delicately balanced fish, frothy merengue and other ingredients on top of thin cones. Isakaya Ozen tightly wrapped buttery salmon around creamy crab, while Baltaire’s Spanish Octopus was the perfect texture — not too chewy or tough — and slightly charred on the outside. Lasa’s squid ink fried rice with smoked coconut oil and herbs had a wonderfully sweet flavor with a bit of crunch for kicks. Both Mainland Poke Shop’s spicy tuna poke tacos and Banh Oui’s Shrimp Toast cleverly paired different textures and fused different cultures together. There were other noteworthy nods, like the massive whole ginger albacore and spicy tuna sushi hand rolls Hamasaku handed out. 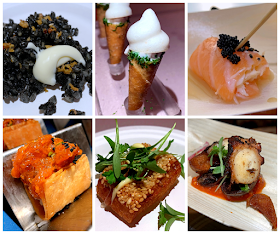 I made my way around the globe over the weekend, sampling Mexican, Indian and European cuisines. Eve creatively mixed oxtails and mole on a crunchy tostada and Tumbi Craft Indian Kitchen offered butter chicken uttapam. I had plenty of tacos, too, thanks to Tacos 1986 and Aqui es Texcoco. Eataly took us to Italy, with its traditional pasta from Piemonte, drenched in sage-and-butter, while Bibigo Kitchen brought out the Korean fried chicken. Yet hands down, my top pick was Church & State’s blood sausage. In theory, this sausage with European roots can sound somewhat gross, since it’s literally blood blended with meats and seasonings (and not every place gets it right, either). But Church & State’s version was a nice balance of flavor, lightly crisp on the outside, tender inside. 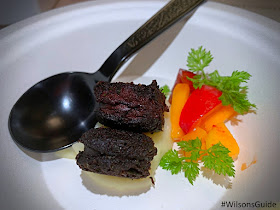 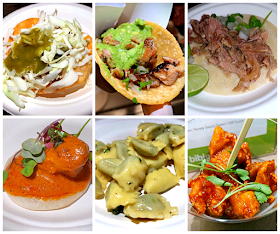 Throughout the weekend, there were definitely more savory and beverage options than desserts…but the available sweets proved they were out on a mission to please. Maker's Mark offered bourbon-infused ice cream that seemed to be a hit with a lot of people I talked with (unfortunately, my lactose intolerance made me sit that one out). I applaud Delicious at the Dunbar for even attempting at making a peach cobbler, because if a family member or a family friend didn't bake it, I’m typically going to pass. Astro Donuts, a #WilsonsGuide fave, offered fried chicken, PB&J and crème brûlée donuts, the latter being very, very tasty (but they get a point knocked off in my books for asking guests to only pick one option due to limited supplies; clearly we want to taste it all!). Yet Donut Friend gets the trophy in this category for making gluten-free, vegan donuts taste so darn good. These mini-treats were fluffy and came in fun flavors like Yo La Mango, Strawberry So Far and Rites of Sprinkles. Plus, you could take as many as you wanted. 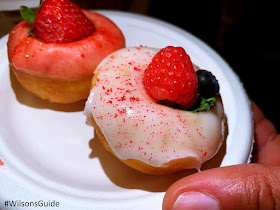 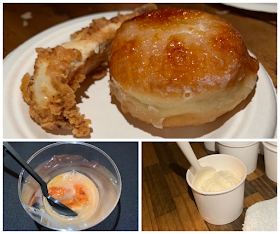 Wine brands came out especially strong on Friday night, so whether you were in the mood for an Australian wine or something glitzy and bubbly, there was literally something for everyone. Bulleit, Ketel One and Maker's Mark all returned, too, with potent mini-cocktails. I’m typically not a scotch drinker, but the Singleton Whisky & Ginger Beer was a refreshing alternative to the standard bourbon and ginger blend. My vote in this group goes out to two drinks that seemed to try and keep summer alive, with refreshing, chilled cocktails: Kelvin Slush Co.’s frosé, which is pretty much frozen rosé, and St. Germain’s concoction of its namesake (which is a French elderflower liqueur), Prosecco and lemon zest. 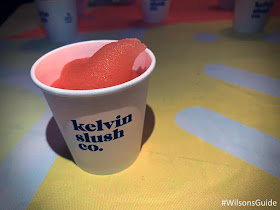 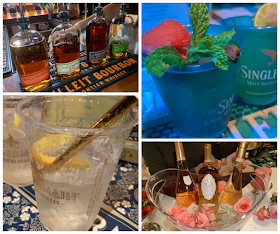 While it’s not uncommon to order a salad on any given day for lunch or dinner, you’re more likely to find more substantial savory options — like meat skewers, mini-sandwiches or even small plates of a veggie assortment — at a food fest like The Taste. Ronan, on the other hand, took a completely out-of-the-ordinary approach by offering tiny uncooked radishes topped with Parisian butter. I’d probably never order a side of uncooked radishes at a restaurant, let alone expect to snack on them at this event, but lo and behold, I was pleasantly surprised at how delicious they were. A point to Ronan for thinking outside the box, bringing something novel to the table, all while getting us all to eat more of our veggies. 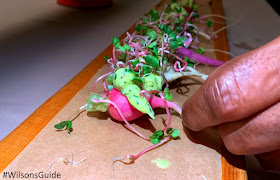 Out of 14 demos to potentially see throughout the weekend, I only attended two — which is two more than I visited last year. Friday night, I sat front row and center for Mark Oldman’s “Wine Secrets,” where we made our way through six tastings, learning about various varietals and how to find our own personal wine preferences. I absolutely had to stop by Kim Prince’s “Hot Chicken Cooking Demonstration” on Saturday night, since I featured her in a recent blog post. She gave out interesting tidbits of knowledge, sharing why you typically serve white bread with hot chicken, and useful tips, such as not turning your chicken once you’ve placed in the oil to fry. 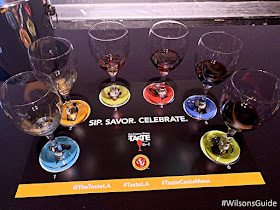 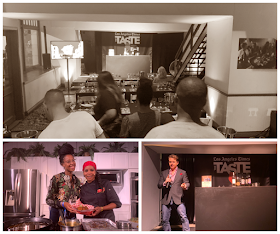 While many participating places may only have a simple tented stand, there are some that go big, taking over massive spaces filled with tastings and interactive activities. Maker's Mark returned with its VR game and photo booth, while Bulleit brought back its camper with reclining seats. Singleton Whisky had a fun toss-and-throw game, giving out small candy prizes, to winners and losers alike (I speak from first-hand experience, because I was in the latter group). Yet the space that caught my eye the most was arranged by Aperol. Decked in neon orange, there was a bocce ball setup, plenty of seats and a stand decked out like a truck where visitors could grab an Aperol spritzer. I felt like I was transported to some tropical destination like Miami, and loved every second of it. 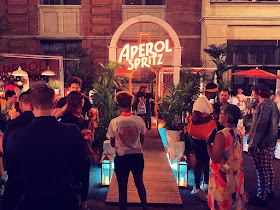 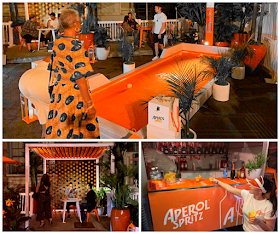 Did you attend the Taste this year? If so, what were your faves and what did you think? Drop your thoughts in the comments section below and see you there next year! 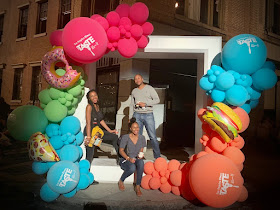 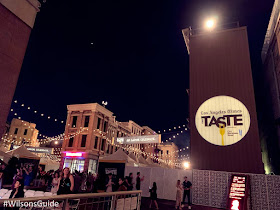